An Editor explains ‘Arnab Goswami’ to an NRI 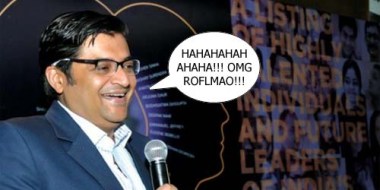 For most TV news consumers, Arnab Goswamiis both a name and a phenomenon. But there are still large parts of the world to be conquered by Times Now‘s bulldog of an inquisitor.

B.V. Rao, editor of Governance Now, explains the name and the phenomenon to a childhood friend who lives in Canada.

Sometime ago during a Googlegroup discussion you innocently asked: “But who is Arnab?”.

In India not knowing Arnab is against national interest. You are lucky you live in Canada. But if you don’t want to be deported on arrival on your next visit, you better pay attention to this complimentary crash course on the subject.

Arnab, as in Arnab Goswami, is India’s most-watched prime time news anchor and editor-in-chief of Times Now*. But designations don’t even begin to describe him or what he is famous for.

You must have heard about hurricanes Katrina andSandy. Arnab is also a storm, a news-storm that hits India every night via his show, the “Newshour”. Nobody is quite sure how, but somehow Arnab gets to know the questions that the “whole nation” wants answers for, or the sinners the nation wants hanged before midnight that night.

In effect then, Arnab speaks for a “billion-plus people” each time he takes centre-stage.

I can’t say for sure if he took this burden upon himself voluntarily or if his employers made it a contractual obligation. Whatever it is, the fact is that Arnab has come to relish asking the most “simple and direct” questions to the most dubious people demanding instant answers to complex problems because the “nation wants to know” and it wants to know “tonight” as in right now.

That’s how impatient India has become while you’ve been away, Sharada.

The Newshour airs on weekdays from 9 pm and continues till Arnab’s pleasure lasts. Often the show stretches up to 10.50 pm. That’s actually “News hour-and-three-quarters-and-then-some” but I guess Arnab has not asked himself a “simple, direct” question: how many minutes make an hour?

That, or his primary school maths teacher is not his viewer. In which case it is safe to say Arnab speaks for a billion-plus minus one Indians.

You will see that at the altar of national interest it is not just the hour that is stretched.

About two decades ago, Dileep Padgaonkar was the editor of the Times of India owned by the Jains of Bennett & Coleman who also own Times Now. Padgaonkar had pompously proclaimed that he held the second most important job in the country after the prime minister’s.

Arnab hasn’t said it, but I think he disagrees with Padgaonkar on the pecking order:  it’s now the prime minister who holds the second most important job in the country.

Hence Arnab runs the show like he would run the country or like the prime minister should but doesn’t.

You see, Sharada, there’s an awful lot of stuff the nation wants to know by nightfall but our prime minister isn’t much of a talker. Arnab fills the need gap. He opens his show with a passionate agenda-setting preamble that spells out all the problems of the day and how he wishes to solve them. We gratefully receive this wisdom and call it Arnab’s Address to the Nation, a prime ministerial duty that has fallen on his broad shoulders because the real guy has abdicated it.

Let me tell you this, however. Arnab is a very reluctant power-grabber. It is not his intent to upstage the prime minister or make him look silly.

He gives the prime minister an entire day to prove his worth and gets to work only at 9 pm when it is clear that the latter can’t handle stuff.

He then solves all outstanding national issues of the day in just one 110 minute-hour of feverish debates where he grills the skin off the back of everybody who dares to stand in the way of India’s national interest.

He is unrelenting in his pursuit of the truth and doesn’t give up unless everybody has agreed with him.

“I am worried”, “I am concerned”, “I won’t let you politicise”, “I don’t agree”, “you can’t get away….” are some of the phrases he uses to suggest he is in complete control and that endears him to a nation starved of decision-makers.

Arnab hates home work. He wants to settle everything here and now, tonight. As a result, in Arnab country, there is no trace of the policy paralysis that has grounded the prime minister in the real country. Here you get resolutions, decisions, orders, diktats, judgements, justice and denouements all in one place, one show, by one man.

The only people paralysed are the subjects of his grilling and the bevy of experts he gathers around himself, not because he needs them, he doesn’t, but because it must feel awfully good to invite experts and out-talk them on national prime time.

Like confused baboons trapped in little boxes, the experts, who are neatly arranged around Arnab’s own imposing self in the centre of the screen, keep staring into nothingness most of the time.

Yes, you get the drift, Sharada, Arnab is the main dish here. The rest are just intellectual dips.

For most of their airtime the experts keep putting up their hands or calling out “Arnab….Arnab….” to indicate they want to make a point. Arnab is too engrossed in disagreeing with what he has not allowed them to say to care too much.

Some clever guests try to appeal to his Assamese roots by hailing “Ornob…Ornob”. He ignores them as well.

Nationalism, after all, is above parochialism. The cleverer among them have cracked the code: they just agree with Arnab in exchange for a little extra air time. These are usually the people who have paid close attention to Arnab’s Address to the Nation and picked up the right cues on what to say that will get them his benefaction.

It is tough to figure out why Arnab needs any experts at all because he knows the answers to all his questions. Times Now insiders say that more often than not he finds questions to the answers he already has. On his show, politicians can’t politicise, bureaucrats can’t beat around the bush, sportspersons can’t play games and lawyers can’t use legalese.

In fact anybody who is good at something can’t do what they are known to do, to the extent that even civil society can’t be civil, especially if it wants to get a word in sideways. Everybody has to be direct, honest, blunt and keep things simple because that is what the (one-man) nation wants.

Corruption, political expediency, opportunism, forked tongues, doublespeak, dishonesty and hypocrisy, are red rags to Arnab. He takes them head-on with the help of his reporters who keep throwing up “documentary” evidence ever so often to expose scamsters.

Usually this is a thick sheaf of indistinguishable papers that Arnab holds up threateningly. It could be a bunch of used airline e-tickets for all we know, but since we don’t, he waves the sheaf confidently in the face of the enemies of the nation and it is generally assumed he’s got some incendiary stuff in there.

Arnab’s problem-solving repertoire is not restricted to national boundaries. In fact, he is at his best when dealing with nations that have evil designs on India. The patriot in Arnab is best aroused when he is dealing with that evil, failed, rogue nation called Pakistan.

He deals with Pakistan like no prime minister has ever been able to or decimates it like no Army has ever managed to. Each time a blade of grass bends to the breeze on the LoC, Arnab breathes fire at Pakistan for trying to sneak in terrorists into the country. He lines up a battery of serving and retired generals of Pakistan and conducts the verbal equivalent of a summary execution.

Yet, the same generals keep resurfacing on Arnab’s show each time he feels the urge to have a Pakistani or two for dinner. This causes much wonderment among Newshour hounds on the masochist streak that makes the Pakistani generals offer themselves up as bait repeatedly.

So, it is assumed the money must be good. But since Arnab insists that Pakistan is the way it is only because the generals have sold their country cheap, it is unlikely he is blowing his budget for this routine cross-border target practice. Of course, left to Arnab Pakistan would have existed only as the largest crater on earth since the meteors wiped out all life on the planet. Yes, he would have nuked it many times over by now.

The Times of India, the country’s oldest English newspaper and the mother brand from the Times Now stable runs Aman Ki Aasha (Hope for Peace), the widely-acclaimed campaign for ending India-Pakistan hostilities.

Just as Arnab doesn’t seem to know of this campaign, the Times of India seems quite oblivious of the fact that the last time there was absolute peace on the LoC was when Arnab took a two-week holiday in early September. It could be the marketing genius of the Times group to milk the issue from both ends or it could also be that their internal boundaries are not as porous as our LoC.

Apart from conducting war exercises against Pakistan, Arnab land is eyeball-to-eyeball with China, exposes the double standards of America in almost anything it does and highlights the hypocrisy of racist Australia which loves the education dollars from India but not the brown students who come along with.

His blood boils so much when an old Sikh is roughed up by a bunch of racist women in the UK that he almost gets the whole of Punjab to rise in revolt against the Indian government’s inaction–even though there is nothing it can do as the gentleman is a citizen of the said country–or builds a tide of emotional revulsion against “inhuman” Norway for snatching an infant from his Indian mother’s custody for alleged physical abuse.

I can go on and on, Sharada, but everything good must come to an end and so must my Arnab eulogy.

So, in short and in conclusion, here’s what I have to say: Arnab is not just the editor-in-chief of Times Now. He’s India’s protector-in-chief. He is the guy who is keeping India safe while you are away on selfish pursuits. You are lucky you can get away by not knowing him.

For a billion-plus Indians,minus of course his maths teacher, that is not even a distant option. Because, truth told, Arnab is the best we have got!